Plans to update and improve Market Street — the thoroughfare that connects Front and The Esplanade on the south side of the St. Lawrence Market — continue to trudge on, though it sounds like a year-round pedestrian-only space isn’t in the cards.

When plans were first announced in 2010, it seemed as though private developer Woodcliffe Properties was working towards creating a space that would be free from vehicular traffic. Paul Oberman was the president of Woodcliffe at the time, a man well-known for his revitalization projects throughout Toronto, including the old North Toronto CPR Station / LCBO flagship store. Oberman died tragically in a plane crash in March 2011, and a movement later spawned to rename Market Street in his honour. 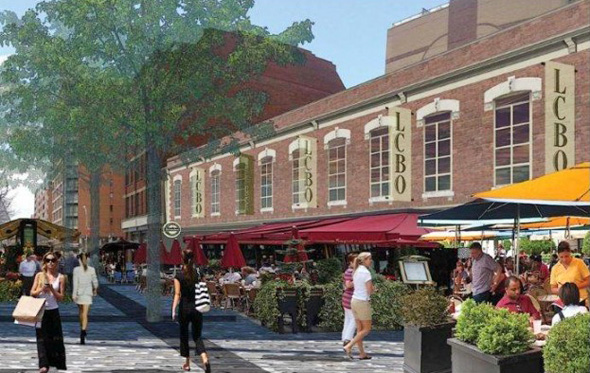 While the name issue still appears to be in question, Oberman’s wife, Eve Lewis, recently told Yonge Street Media that, “Everything is going according to Paul’s original design.”

“We have gotten the approval for the sidewalk widening,” she added, “which is the first private initiative [like that] that’s ever been done in the city.”

According to Councillor Pam McConnell’s winter newsletter, however, Market Street may not take shapeexactly as first hoped. She notes that plans include bollards to divide the sidewalk from street parking, which means despite the widened sidewalks (which will taper down to the street, eliminating a curb), cars will still be able to navigate the block.

The newsletter also outlines other Market Street revitalization details, which include Woodcliffe’s restoration of the LBCO, construction of new office spaces, and renovations to introduce restaurants at street level. The Market is also planning for an enclosed retail space on the east side. Construction will likely start this spring.