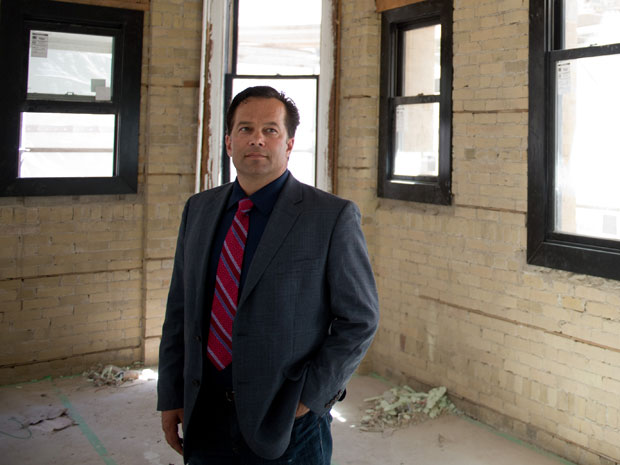 Once an icon of Renaissance Revival style, the withered heritage building at the corner of Yonge and Temperance Streets has seen better days. Now, a local developer vows it will see them once again.

“You look at old photos of it and it just looks beautiful,” says Clayton Smith, president of Commercial Realty Group. “I’ve wanted to restore it so badly for years. So one day I was bored and said, ‘What the hell, I’ll give the owners the $7-million they want for it.’ ”

Known as the Dineen Building, the property at 2 Temperance is a surviving example of a late 19th-century commercial building in the city’s financial district. It was built in 1897 for W. and F. Dineen Co., a producer of hats, caps and furs. Mr. Smith purchased it last fall, and has since been working to restore it to its former glory.

“I’m not fixing it up in the classic ‘Let’s demolish it and rebuild something’ kind of way,” says Mr. Smith, who also owns six other heritage buildings in the city. “What I try to go for is more like: ‘This is the way it looked 115 years ago.’ ”

The Dineen Building, as it was before restoration started at top, and its future, at bottom.

Through a restoration method called adaptive reuse, Mr. Smith and his various tradesmen are resurrecting the building to look as it once did, while making it work in a modern context. The structure’s masonry, sandstone balcony brackets, cornice, decorative ironwork, windows and main entrance are all being retouched and revived, while electrical upgrades and a new elevator are being installed. Age-old J.J. Taylor vaults found deep in the basement are being polished and placed in the lobby. Whereas the building’s exterior exhibited a mucky, grey hue in recent years, Mr. Smith is reconditioning its deteriorated bricks to resemble the radiant, buff-yellow ones it once had.

“The building was in really rough shape,” he says. The family that owned the building before him rented it out cheaply to various tenants, he says. “You felt like you were in the Bronx in there. The bricks were cracked. There were mattresses on the floors. It was disgusting.”

Mr. Smith says the Dineen Building will now be rented to high-end restaurant owners and professionals. The storefront will feature an Italian sidewalk bistro, a wine bar and a Starbucks with a “historic theme,” while the next three floors will be used for office space. The centrepiece, however, will be a rooftop restaurant with a panoramic view of the financial district. He says the glass encasing will have a darkened tint, so as not to detract from the building’s heritage character.

“In order to make the building pay, we have to add on modern additions like the glass rooftop restaurant,” says Philip Hoad, president of Empire Restoration Inc., a company Mr. Smith hired to work on the building’s exterior. “The owners need to be able to get some income and pay for the costly work that’s involved in bringing these buildings back.”

While many property owners cannot justify the costs of rehabilitating old buildings rather than demolishing them, Mr. Smith thinks saving heritage properties makes good business sense. It’s something he realized a dozen years ago when he purchased his first historic building, at 50 Richmond St. E.

“I could have easily gone with the old-school mentality of taking over a building: Clean things up, sweep up some floors and lease it for minimal rent,” he says. “You might get $20 per foot in rent. But what I like to do is go in, restore it, clean up, modernize everything else and get $40 a foot. Sure, I’m investing a sugar-load of money here, but this is how to create a silk purse out of a sow’s ear. It’s lovely looking at old antiques, but don’t you love it when the drawers actually work?”

The Dineen Building in better days at front-left.

He isn’t the first to breathe new life into old structures. The late Paul Oberman, who died last year in a plane crash, was an icon of adaptive reuse in the city, brilliantly reviving King James Place and revamping the old North Toronto train station as a chic LCBO, among his many projects. Mr. Oberman liked to boast that his work was ample proof that developers could still fill their coffers restoring and updating heritage buildings.

“Oberman showed that it could be profitable,” says Karen Carter, executive director of Heritage Toronto. “There was a good business model there. Developers aren’t always going to come to these spaces the way heritage die-hards might like, but sometimes the middle ground is what’s necessary to ensure these buildings are saved.”

Many developers today are carrying Mr. Oberman’s torch, some not only for monetary gain. “It’s way better to keep a building and reuse it for something else than putting it into a landfill site,” says Brian Curtner from Quadrangle, the architectural firm known for turning the old Ryerson Press building at 299 Queen St. into the Citytv headquarters. “Thirty per cent of landfill sites worldwide are actually filled with construction materials. It’s just inherently good practice to take an old building, renovate it and repurpose it so it has a meaningful use in the modern era.”

Last year, Mr. Smith purchased the iconic Flatiron building, formerly owned by Mr. Oberman. While he refuses to say he is following the late developer’s footsteps, he clearly shares a similar philosophy. Although each of his renovation projects have cost him a fortune in restoration expenses, he says they’ve all been successful ventures. He expects the Dineen Building to take at least a few million dollars to rebuild — an investment the city appreciates.

“I would call this a very successful project from a heritage point of view,” says Scott Barrett, senior co-ordinator of Heritage Preservation Services at the city of Toronto. “We have difficulty, from time to time, with things like the retention of facades alone. We try to work with property owners as much as we can to save as much of a property [as possible], but there’s a lot of development going into constrained sites downtown, and that certainly puts pressure on the development aspirations of applicants.”

To Mr. Smith, the real appeal in salvaging archaic dwellings lies in his respect for the hours of handiwork devoted to their construction.

“I think it’s as simple as appreciation for the workmanship,” he says. “Let’s face it: There’s a lot of glass and steel out there today. Who does that sort of panache, like these little terraces and the handcrafted sandstone, any more? It’s just not done today.”